So far, we’ve celebrated gigantic-sounding candy pop, long takes of bear attacks, space eyebrows, journalistic integrity, and the quality of empathy as expressed through radio. We soldier on. Here’s more excellence in sound and screen, and also this list’s first instance of excellence in panels: 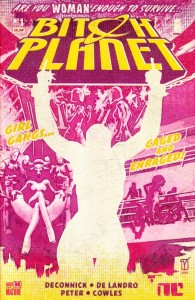 This comic is badass feminism 101. If I could force everybody I know to read it, I would, because for most of them it would be validating and triumphant, and for the rest it might disavow them of some dodgy notions.

Kelly Sue DeConnick’s brand of dystopian satire is a wonderfully blunt instrument. Aside from the literal existence of a prison planet where non-compliant women are sent for various crimes against the patriarchy, the world of Bitch Planet is essentially no different from our own. Its power comes from the fact that most of its characters’ struggles are stories you might actually have heard somebody tell from personal experience.

But aside from being merely (ha) progressive, Bitch Planet is also exquisitely crafted and detailed, right down to the zine-inspired design and 90s comics-style joke classifieds in every issue. As a trade-waiter on principle, the wait for the next volume is going to drive me insane.

Has there ever been a more compelling unsympathetic loser on television than BoJack Horseman? In its far-superior second season, BoJack becomes the cartoon animal version of Don Draper: attaining his dreams, alienating everybody he loves, gradually self-destructing, and trying and failing and trying and failing to put himself back together. And everybody around him seems to be coming apart at the seams for their own particular reasons, as well.

But the fact that these plotlines are embedded in a show that’s this joke-dense and whimsical allows BoJack Horseman to do what lots of these trendy shows full of terrible people fail at: it can take for granted that people are often horrible and don’t deserve their good fortune, while still being compulsively watchable.

And on top of everything, this season gave us “Hank After Dark,” one of the most visually dense, funniest and also most chilling episodes of television of the year. As a response to the Cosby spectacle, it’s as powerful as anything. If the season has one weakness, it’s that “Hank After Dark” thoroughly eclipses even the second-best episode.

Even as a confirmed minimalism devotee, I couldn’t get into Terry Riley’s classic In C until I heard it performed by West African musicians.

Africa Express is a project started by the distinctly non-African Damon Albarn, with the participation of a couple other notably non-African people including Brian Eno, who is required by British law to be involved in everything.

The idea behind Africa Express was to forge meaningful connections between European and African musicians. Given that, you may well wonder whether it’s a tad suspect that Albarn’s second recording with these musicians is entirely focussed on a piece of Western classical music. But, just listen to the record.

The thing that’s immediately clear is that In C Mali is more than just another recording of In C. The music on this recording does not belong to Terry Riley nearly as much as it belongs to Africa Express. In C is freely structured to the point where every performance is slightly different, but this performance is entirely its own thing. The musicians own this music. Riley fades into the background.

I doubt I’ll listen to any other recordings of this piece for several years, at least.

Sometimes you see critics say things like “it was better than it needed to be” when a show or movie has a built-in audience from a beloved related property.

Better Call Saul was massively better than it needed to be.

The important thing that Vince Gilligan and Peter Gould realized is that they couldn’t, shouldn’t, and were under no obligation to replicate the successes of Breaking Bad. So, they made a show that fans of Breaking Bad would be sure to enjoy — it’s got that signature dialogue and all the stunning sights of Albuquerque, N.M. — but that is a fundamentally different show in terms of content and pacing.

Better Call Saul lacks its predecessor’s explosive plotline, allowing it to luxuriate in its characters and themes the way that Mad Men does, and the way that Breaking Bad didn’t. The greatest side effect of this is that it gives Bob Odenkirk and Jonathan Banks more space for multifaceted performances as Jimmy McGill and Mike Ehrmantraut, respectively.

This show didn’t just overcame the impossible expectations associated with being a Breaking Bad spinoff: it also staked out its own territory immediately. I suspect it’ll only get better.

To some extent, Quentin Tarantino is a substance. Each of his movies is an additional quantity of that substance to be consumed. If you didn’t enjoy the last jar of Tarantino you ate, you’re not likely to enjoy any other ones either.

The Hateful Eight is an entire movie’s worth of the Mexican standoff in Pulp Fiction, the barroom scene in Inglorious Basterds, or the final confrontation in Kill Bill: Vol. 2. It has an amazing cast full of people who clearly delight in saying the sorts of things that people say in Tarantino scripts. And, if you live in an opportune place, you can see it (as I did) in glorious 70mm projection, complete with the novelty of an overture and an intermission.

At this moment, it is my second-favourite jar of Tarantino.

Tomorrow, we’ll pick up from no. 15, with our most whiplash-inducing set of five yet: an album, a movie, a comic, a show and a podcast.