After four days winding our way through the thick jungles of culture with nothing but the dull pocketknife of my wit to cut through the overgrown foliage, we have at last cracked the top ten. Suffice it to say that everything from this point forth completely blew my mind.

The key line in Carol is spoken by Rooney Mara’s character, Therese: “I have a friend who says I should take more of an interest in humans.”

Critics have been saying that Todd Haynes should take more of an interest in humans since the beginning of his career. Even the simplest of his films are so meticulous and skillful that he’s open to accusations of “inauthenticity.” If you’re not paying close enough attention, you could easily mistake him for an artist who’s solely concerned with abstract matters like beauty, style and form, at the expense of the characters in his stories.

But like Therese (a photographer, notice), Haynes is not just a chilly aesthete. He has that tendency, but when presented with the fully-alive characters of Patricia Highsmith’s novel The Price of Salt (and Phyllis Nagy’s wonderful screenplay), Haynes becomes deeply interested in humans.

Carol is beautiful, and not just from a distance.

No. 9 — China Miéville: Three Moments of an Explosion 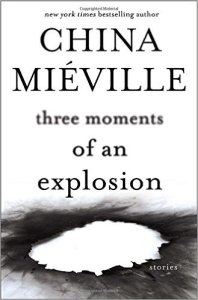 Bob Dylan once said that every line of “A Hard Rain’s A-Gonna Fall” is the first line of a different song that he was never going to have time to write. China Miéville is primarily known as a novelist, and when you’re reading this collection of short stories, you get the sense that each one is the first chapter of a novel he’ll never have time to finish.

The stories in Three Moments of an Explosion differ wildly in theme and length, but they all share the tendency to state their premise in however many words are necessary, and then stop. Miéville can spin a yarn as well as anybody. But, in most of these stories he’s more interested in taking an unlikely notion he’s had, turning it around a few times to see it from different angles, and putting it away.

Most writers couldn’t pull that off for a whole book. But Miéville has a gift for coming up with incredibly specific and uncanny premises that you want to read about the implications of. One of these stories is about a disease that causes circular trenches to form around people when they stand still for too long. Lots of writers would be able to take that and turn it into a parable on the compulsion to keep moving, or whatever. Miéville thinks: “What happens if they’re in a car?”

Three Moments of an Explosion is a flagrant display of profound virtuosity. Nothing else this year gave me so many separate reasons to be in awe.

When I first heard this album, I described it as “one of those unexpected pleasures.” Since then I have realized that doesn’t begin to cover it. Vulfpeck is not just a band. Vulfpeck is a self-contained world of madness with a Wes Andersonian level of internal consistency. There are no half-measures in Vulfpeck. Their commitment to maintaining a uniform aesthetic doesn’t just extend to their music, but also to their videos and every bit of peripheral material they issue. Vulfpeck is as much about fake film grain and pictures of dogs as they are about sexy basslines and Rhodes piano. This is the band that raised $20,000 dollars in Spotify royalties by issuing a silent album and asking people to put it on repeat overnight. It’s not just about the music. Vulfpeck is a zaniness factory.

Their first full-length is their most controlled release yet. It’s funk, like all of their music, and they still sound like talented slacker dudes from a commercial music program at some community college. But more than on any of their EPs, the music on Thrill of the Arts sounds like it was recorded in an airless room. They are truly earning their German affectation here: this is Parliament by way of Kraftwerk.

And it has some of the most technically astonishing performances I’ve heard this year. Antwaun Stanley’s amazing vocal on “Funky Duck” is probably in my top ten favourite committed performances of stupid lyrics. (The other nine are all Rush.) And Blake Mills’ guitar on “Rango II” (a sequel to a previous song, because that’s a thing they do) is one of those moments where you don’t actually know how he’s even doing that.

Vulfpeck is the kind of band I would hope to be in if I were in a band. What higher praise can any music geek offer?

TV’s not made for endings. I’m not the first to observe this. The whole idea of a TV show is to have an central concept that can sustain years-worth of stories. It’s not about having a complete narrative worked out from day one. That’s why people who say “the ending ruined the whole thing” or, “they didn’t have a plan” are missing the entire point of the medium.

But I don’t think it’s even possible to say those things about the ending of Mad Men, which was perfect in every way. Like everything else about the show, it’s impossible to know quite where it sits on the spectrum of sincere to cynical, and there was no ham-handed attempt to try and tie off every storyline in a neat bow. Mad Men ended in a way that it can continue to be a thing rich with multiple meanings, many of which even Matt Weiner probably never thought of.

If you tell me it’s the best show ever, I won’t argue.

There are two kinds of podcasts: the kind that could (or do) air on public radio and the kind that couldn’t. There is no value judgement implicit in that taxonomy. Before public radio caught on that it was a possible future, an aesthetic had developed around podcasting. And, that aesthetic was basically two or more people talking, without a huge amount of craft or artifice.

Reply All, the brightest jewel in Gimlet Media’s increasingly dazzling crown, is the first public radio-ready podcast where the hosts seem aware of that legacy. P.J. Vogt and Alex Goldman’s personalities can carry the show a long way. Consider their recurring segment “Yes Yes No,” where they explain various convoluted internet things to their boss. That’s some good podcasting, right there. And that dynamic informs every episode of the show.

But this is still a Gimlet show, and they are On The Media alumni. So, these episodes are still finely-crafted, thoughtful, borderline fussy radio. Plus, they’ve got a premise (“a show about the internet”) that allows them to do anything. If you don’t know this show, listen to the episode above, then start from the first one and listen to all of them. They’re remarkably consistent in their brilliance.

Be sure to come back for the thrilling conclusion, wherein several eternal questions shall be answered: What’s the number one album going to be? Did Matthew play any games this year? And, will anybody have actually heard of the thing that tops the list???